The PowerTone snare drums were a line that Rogers originally carried from the early ‘60s to the early ‘70s. It was based off of the iconic success of their Dynasonic. PowerTones featured the same wood shell or chrome over brass shell, only without the Snare Rails. Like the Dynasonics they didn't have a snare bed. They were very popular drum back then, and they're still talked about by a lot of players today who love the sound of the old  PowerTones.

When Rogers relaunched a few years ago, they came out with the Dynasonic snares first, followed by the Covington series drum sets, along with some very cool hardware re-issues.

Now we have the PowerTone, which is a new interpretation of the original.  These drums are targeted at a much more competitive price point (around $400), making this a really attractive option for people who want a Rogers drum at a lower cost.

The new PowerTones are available in either steel or wood shells, in three different sizes; 14x5, 14x6.5,  and 14x8. The Maple/Poplar wood shell looks exactly like the shell we're seeing on the premium-priced Covington series drum sets, and they are gorgeous. There are 2 exterior finish options - Satin Natural and Piano Black Lacquer.  PowerTone shells are 5-ply with 2-ply reinforcement rings, and finished on the inside with a Fruitwood lacquer. The hardware consists of eight classic Beavertail lugs, 2.3 triple flanged hoops and the iconic clock face throw off. We were pleasantly surprised to find a premium Remo USA Coated Ambassador on the batter side!

The other offering is the Steel PowerTone Snare Drum. This is a fairly thin steel shell with flanged edges, which is great for getting some serious cut. The Steel PowerTone shares the same hardware appointments as it’s wood counterpart, including the classic Rogers script badge. 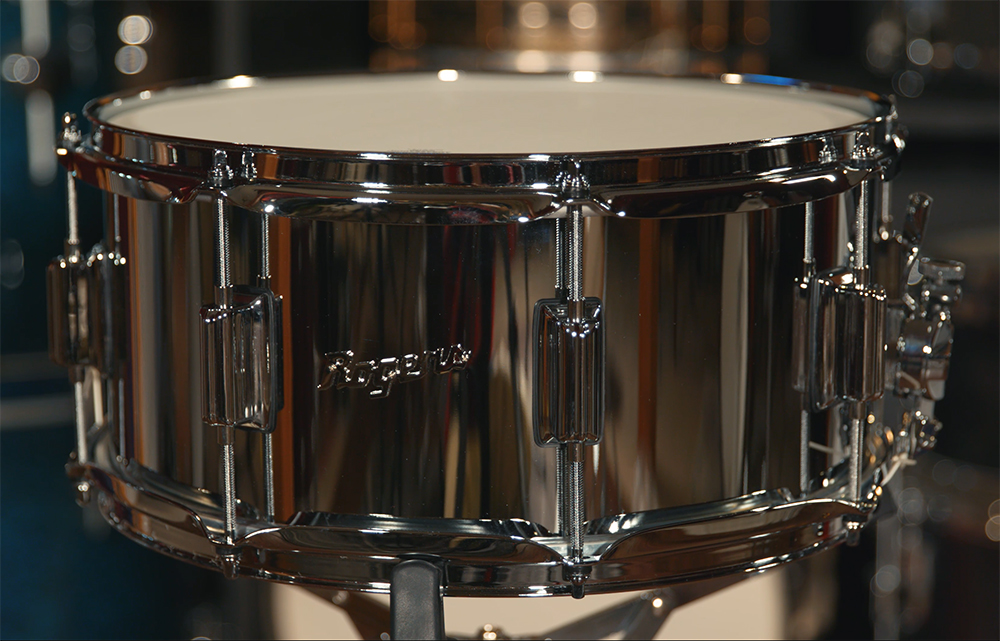 How To Make Them Even Better

We played all 6 versions of the PowerTones recently, and noticed that they were very easy to tune up or down. The (intentional) lack of snare beds became noticeable when we tried to “give it the gas”, meaning the snare response was lacking a bit. We would suggest upgrading the steel PowerTone with Canopus 42-strand wires, and the wood versions with Puresound EQ’s in order to compensate for the lack of snare beds. Another change we would suggest is to swap out the UT Remo snare side head for the premium USA version. These small tweaks will definitely improve the overall sound and response from your new PowerTone.

Overall, we were pleasantly surprised by the value of these new Rogers Snare Drums. This is a nice new

way for Rogers to penetrate a new segment of the market that has not been available to them since their triumphant re-launch. These would make a solid utility snare for any gigging musician who has longed for the classic Rogers tone of the ‘60’s and ‘70s. At Drum Center of Portsmouth, we carry a huge selection of all things Rogers!

27 days ago
Search The Blog