5 Best Cymbals for Rock in 2022 Reviewed

Among the many kinds of drumming, rock drumming is arguably the most famous. Just watching the legendary drummers of Led Zeppelin or Nirvana's Dave Grohl has convinced countless musical hopefuls to get their own drum set and start banging and grooving.

Rock drumming has a specific sound, and cymbals are a big part of distinguishing this genre and its vigorous style. Think Motley Crue's “Without You” or Rush's “Xanadu”—the crash of the symbols gave these songs their legendary tone.

To perfect the art of rock drumming, you'll want to make smart buying decisions for all your drumming accessories – including cymbals.

With so many options for cymbals on the market today, it can be hard to know which ones truly stand out in their rock performance. Narrow down your choices with our list of the best cymbals for rock music, put together by DCP.

At Drum Center of Portsmouth, we carry one of the widest selections of drums and drumming accessories available online. Here are the five cymbals we recommend most for the rock genre from this selection:

Paiste Rude Cymbals emit a unique sound that you won't find anywhere else on the market. The brand makes its cymbals specifically for hard-hitting, as that's when they produce their best sound. These cymbals would go to waste on soft music because they are loud, rude, crass—in short, they were made for rock.

These cymbals have an enormous attack, short sustain, and low pitch. It doesn't make them versatile at all, but if all you play is rock, these might be the cymbals you need. Their powerful sound is not old-school or modern-sounding, but they sound extreme on every level.

They're very distinct. Sepultura's drummer uses this series of cymbals, which supports the band's uniquely severe sound. There's no question—these drums are for heavy hitters.

Overall, if you know that the only genre you'll be playing is rock, or if you're looking to invest in a set of cymbals that will give the darkest, hardest, and most distinct sounds when you are playing rock, this is an excellent hard-hitting cymbal set worth your hard-earned cash.

The 2002 set fuses the Giant Beat Series and the Formula 602 Series, bringing rock drummers the best of both worlds.

Many legends have played these cymbals, from Phil Rudd and John Bonham to Dave Lombardo and Carl Palmer. They're not too bright or dark but find their tone somewhere in the middle. They're a perfect solution if you're after a modern sound that is loud and raw but with a strong and highlighted attack.

If you're going after a strong, vintage sound, like the songs of ACDC, the 2002 series is a great place to start.

An excellent option for someone chasing a vintage sound and a happy middle ground between bright and dark sounds, these Paiste 2002 Cymbals have proven their worth. But don't let us be the ones to tell you—take it from the mouths of celebrity clientele, who have turned to this series on their way to becoming rock legends. 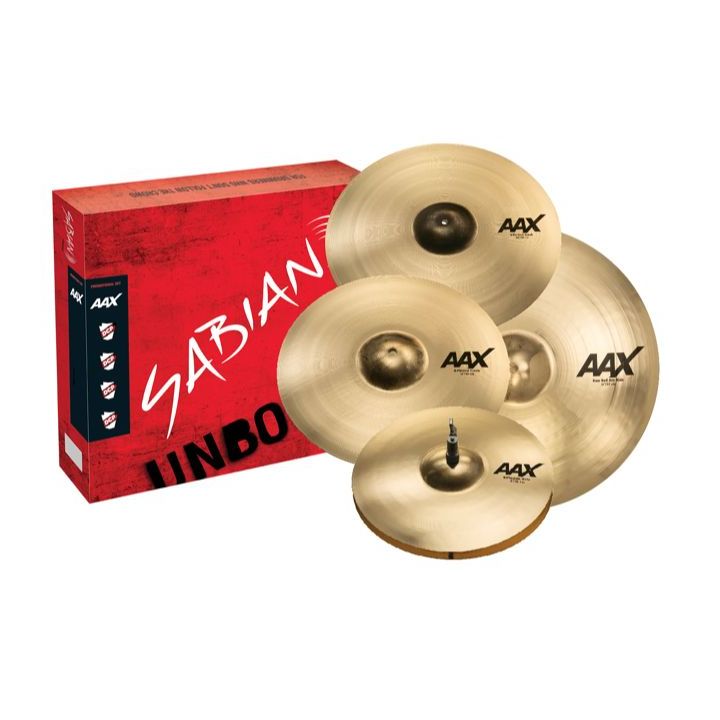 Cymbals series can be costly, but these Sabian AAX cymbals are more affordable than others while still providing an impressive sound.

While you may think the best cymbals are automatically the most expensive, this series will quickly prove you wrong. Incredibly successful drummers have relied on this set to produce incredible rock music, even with the cymbals' uniquely bright sound.

Versatile enough to work with different rock songs, these cymbals can break through the noise with crisp tones despite even heavy riffs.

If you want versatility from your cymbals and are going for that vintage, old-school sound without breaking your budget, the Sabian AAX pack of cymbals is hard to beat. 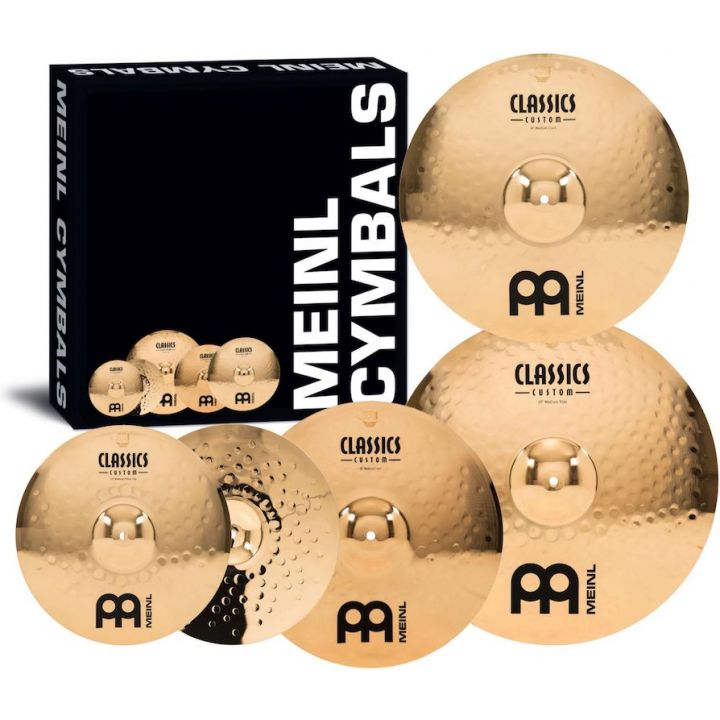 Younger rock drummers can sometimes be more aggressive than their older counterparts, and these Meinl Classics Custom cymbals are made for this group. This series is an excellent option for anyone who wants to upgrade an introductory set without spending a fortune.

You can expect consistency throughout your set and among different sets, thanks to a high-tech computerized system that controls the hammering and lathing to create the same set of cymbals every time.

This pack will cut through a dense and loud mix of instruments, so drummers don't have to hit so hard for audiences to hear them.

Perfect to take your skills to the next level, this Meinl Classic Custom series can perform well even when paired with loud, heavy rock instruments and doesn't struggle to be heard. Thanks to automated production, every drummer can feel confident that they're getting the same great set of cymbals as everyone else without questioning the quality. 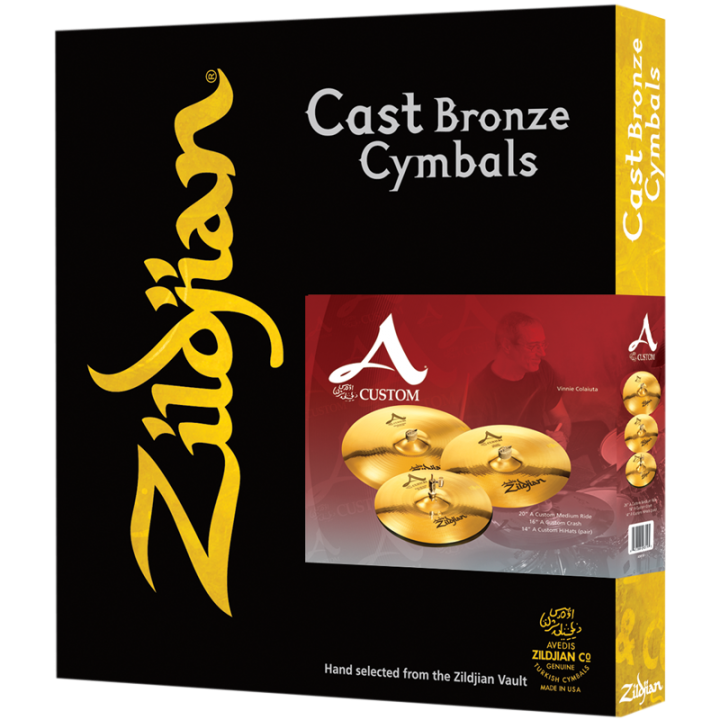 If you're looking for cymbals that are both really well-equipped for rock but versatile enough to work well with other styles of music as well, look no further than the Zildjian A Custom Cymbals. These cymbals come from one of the oldest cymbal producers in the world, so you can trust that they've mastered their craft to make these fine musical instruments.

While Zildjian didn't make this series explicitly with rock and roll in mind, this series still has a near cult-following among drummers who swear by the cymbals' brilliant finish. Metallica, for example, is known for using this series on nearly the entire drum kit, proving that even a brighter sound can work well in heavy music.

The finish, along with its bright and modern sound, adds a bit of punch and can break through distortion from guitars without taking all of the attention away.

Drum cymbals constitute a significant investment, so even if your preference is rock, it can be nice to know that your cymbals can also work well for other styles of music. This series is the perfect solution that will work well for your rock songs but can transition smoothly to different styles as your skills and preferences change.

What to Consider When Buying Rock Cymbals?

What makes drums great for jazz may be the very reason they perform poorly in rock, so it is essential to know what qualities and features to look for based on the music you're playing. For rock music, you want to ensure the series you buy is durable enough to withstand your force, has the right weight, and produces a tone that doesn't struggle to be audible over the noise.

Rock drummers play with passion. Rock songs are hard and heavy, so the cymbals that the rock drummer uses must be durable enough to withstand this kind of traction and force again and again.

Softer music styles don't need this kind of durability, but heavy rock music cymbals need to be able to go the distance, even with a high-energy and hard-hitting drummer.

Thinner cymbals produce a specific sound, but that sound isn't often something you need in rock. Instead, you should be looking for a series with a significant weight or heft.

These denser plates are louder, which helps them stand out in heavy songs where multiple instruments compete simultaneously.

While you might think a darker tone is what you're looking for in rock music, it's a brighter tone that fits best in mixes because the sound can cut through the other dark and complex tones of the guitar and other instruments. This brightness brings out the different rock sounds and provides levity where they need it most.

The best cymbals for one genre very well may not perform well for another genre, so knowing which series is best for the music you want to play is key in selecting the right cymbals for you. Here at the Drum Center of Portsmouth, we carry a diverse range of drums and accessories, including the top performers of the rock genre.

Browse our premium selection of high-quality cymbal sets online to find one that will work best for you and your distinct sound.

6 days ago
Search The Blog