I’ve kept a close eye on the British Drum Company since their launch in 2015. Their story is an interesting one, one that exemplifies taking the “long way around” to get to where they are. Keith Keough is one the leading drum builders in the world, he has an incredibly keen eye and attention to detail which led him to start his own brand of drums, called KD drums. A few years back, his company was purchased by the Premier drum company and Keith was tasked with continuing to make his world class instruments, only now with a Premier badge on them.

When this happened in 2011 (or was it 12?), Premier had a booth at NAMM that made me completely drunk on drum awesomeness. The woodwork, the sounds, the history of the brand, everything ticked my boxes and I grabbed my wallet and went in full force.

Premier has a sullied legacy here in the USA. Their history goes back to 1922, started by the Della Porta family. The family made incredible innovations for many, many years, and they filed for an incredible amount of patents. If you want to test the level of commitment of a drum enthusiast, ask them about Premier. If they light up or if they appear sad; you know you have a bona fide, long suffering drum nut on your hands. There are things Premier brought to the marketplace that were so incredibly ground breaking and timeless; many of them going largely unnoticed by the uninformed public. The beauty of their chrome plating, the art deco everything, and the undisputed British elegance made them an absolute favorite of mine. The Resonator, Signia, Genista, and Soundwave kits are still drool-wothy drums.

Following the tradition of excellent instruments and poor management, the partnership with Keith (as well as UK production of Premier drums) ceased abruptly in 2014-15ish, leaving me unsurprised but accepting. The original iconic Premier drum factory, a place I was never able to visit, was torn down this year to make way for a grocery store. I followed the photos of it, and tears came to my eyes. There was so much history there. In a world of faster and cheaper, I sometimes find myself ogling at the Lok-fast hardware and wondering why no one has carried on this torch.

I was happy to see the launch of the British Drum Company and I’ve tracked their progress. I recall visiting the booth last year and feeling that we weren’t ready for them yet. They were nice, but at this point, I have enough ‘nice’. I need outstanding. For a grisly, well traveled drum nerd, ‘outstanding’ becomes increasingly difficult to find.

I stopped by the booth this year with an incredibly noncommittal,indifferent approach. As a long suffering European drum enthusiast in the United States, I’m accustomed to disappointment and self imposed sighs. This year, I found FIRE. I found INNOVATION, I found a group of people that share the same passion to improve the lives of the drummers that support them whilst being able to humbly nod to the art deco stylings of the Della Porta ethos.

At a quick glance, the Lounge series, or the Legend series appear to be a sharp, well made kit in a crowded marketplace. Upon closer inspection, the similarities end there. The shells are layed up in a cold press, completely opposite of the majority of other drum makers. The thicker plies are pressed into a thinner shell that remains a bit undersized, creating the intoxicating stick attack. The “B” in the British Drum logo is reminiscent of the “P” in the Premier logo and the “B” in the Beverly drum logo. (Beverly was a lower cost line of Premier drums for a spell, like PDP is to DW). Like the George Way drums, the lugs have a fresh look with a warming familiarity. This is not easy to execute, yet they have brilliantly. The mounting system is VERY good, a no mess, no fuss direct to shell contact that also proves shell to hardware isolation. Maximum tone, minimal hardware/head change frustration= Happy Shane.

The Lounge series is the “Club Date” style kit with the round, tubby sound that is popular these days. The Legend is 10 ply Scandinavian birch that is compressed down to a 6mm shell. 2 ply rings help support the shell, and it’s geared for the drummer who needs articulation.

We want to gear you up!

Buying drums should be fun. At Drum Center of Portsmouth, our goal is to have the most unique and vast selection of boutique drum sets, snare drums, and cymbals, and to cultivate long-term relationships with our customers and clients. 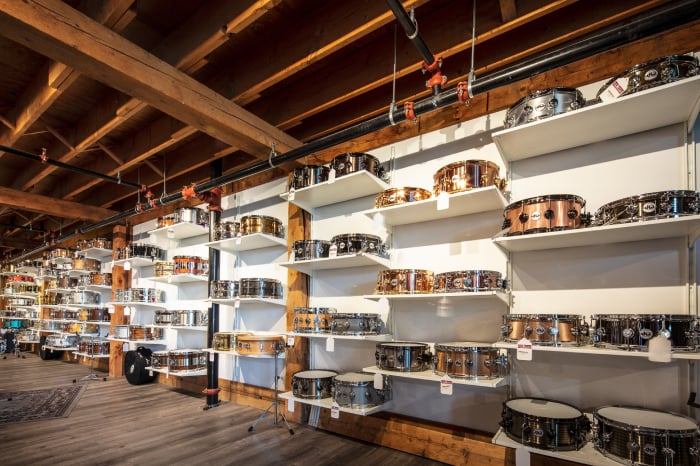